As a child, Bjørn Melhus was always fascinated by American science fiction series. Nowadays he uses them as a treasure trove for dialogues and figures in his much admired video collages that demonstrate a playful approach to this everyday medium. He uses his media memories as a source of inspiration in order to incorporate TV studio out-put into his artistic exploration. In Captain Melhus slips into the role of the captain of a space ship, accompanied by a bold man and a boy in his communion suit. Threatened by a dark power and while stars are exploding in the background, all three perambulate in dialogues, cut from different science-fiction films. Shall the Captain give up the ship to the “executor”? Melhus’ bizarre montage compromises how Hollywood’s association with strangers changed in the 1970s and 1980s. Openness and curiosity turned into mistrust and readiness to fight. 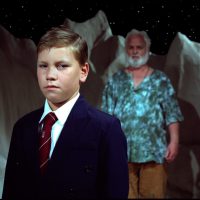 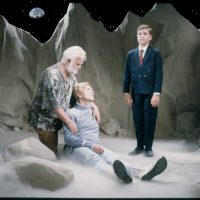 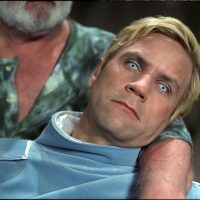 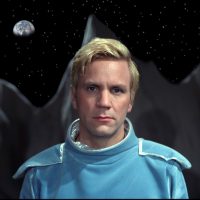 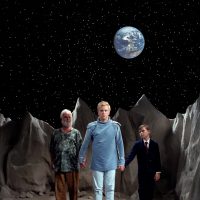 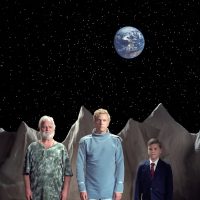 Analogous to the bipolar world of Christ and Antichrist, Leibniz developed the binary counting system based on one and zero, thus creating the foundation for the great simplification machine, the computer. The two-pole principle has also been a sensational success in many other cultural achievements. World politics follow it, computer games comply with this structure, and for Hollywood’s blockbusters it’s an essential condition to keep the budgets, frequently amounting to several hundred million, rolling in. In a complex world there is a strong attraction to simple patterns. We get quite a lot of pleasure out of simple structures – at least for the brief period of time we spend staring at the rectangular events, they are a wonderful way to pass the time: the light against the dark, the locals against the outsiders.

Bjørn Melhus grew up in the TV world of the 70s and 80s. His videos feed on American cult films such as “East of Eden”, fairy tales such as the “Wizard of Oz”, war ragings like “Black Hawk Down” and sci-fi series such as “Star Trek”. With an obvious enjoyment in dressing up, and with the over-elaborated dialogues from this huge fund of film material, he tracks down the undercurrents and power clichés of the mass-produced cinematic article, which has provided heroes and identification patters for whole generations. In his latest video installation he has the crew of the youthful captain on a space mission talk in the hollow words of Star Trek. Together with a princess (Melhus’s father) and the somber “liberator” (Melhus’s nephew) the blond commanding officer (B. Melhus) sees himself in an inhospitable rocky scenery, exposed to an indefinable threat with flashes of light, explosions and collapsing planets.

The Good Guy Captain soon has to admit that his human-utopian empty set phrases cannot exist against the grim executor’s maxims “…must destroy it” and “…trapped in old concepts”. In a healing trance, he transmits his leadership to the figure with the shaded facial expression. Together, they then go against the enemy. The captain’s whispered “Conquest is easy, control is not” lays claim to the moral leadership, but the character turns his attention to what needs to be done.

By humorously and villainously reducing the mass-produced cinematic junk and its genre mechanisms to elementary constituents in his little narrative of sound fragments from the space series, Bjorn Melhus opens up an ironic-poetic cosmos. With just a few typical sentences, settings and gestures by the amazing actors, he steers our attention to the complexity of the subtext of our everyday media life. Repetitions and retarding graphics jingles emphasize and comment on the plain surface of daily TV junk. With enjoyment and brilliant ease, Bjørn Melhus plays with the supposedly simple media fare, at the same time offering science fiction for the advanced. (H. Nöring)