Depicting pairs of infantile doppelgängers floating in a space that evokes their own interior world, NO SUNSHINE is a tragicomedy that explores the images—or rather the remembered images—of childhood, and the ensuing questions of identity. Triggering associations of the sexless toy figures of Playmobil, which set the stage for the perception of the world and the playful coming to terms with it for many children, the childhood projection is played out further as the figures sing a duet in the childlike voices of Stevie Wonder and Michael Jackson. Taken to such pseudo-romantic and cliche-ridden extremes of what constitutes childhood in the eyes of the entertainment industry, this work delves in its inherent absurdity and goes as far as to hint to the popular patterns of explanation and the reception of psychoanalysis in the 1960s and 1970s. Looking back into the past, at the toy model, means dissolution, an implosion in a vacuum. Dissolving the idyllic romantic image of childhood, NO SUNSHINE mirrors the images of television memories and in their alienated otherness points them back towards the medium.
Floating in a red coloured space that invokes the human blood system, the sexually neuter doppelgänger pair also recall the possibility of human cloning and the idea of the original—a fact sustained by the narrative loop that the video screening employs. The eternal recurrence repeats itself, the never ending story never ends. The images become ornament, pattern, a model of perception of childhood where they lie so close to the sadness and crisis of their loss of reality.
(Synopsis by Benoit Detalle) 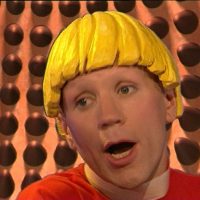 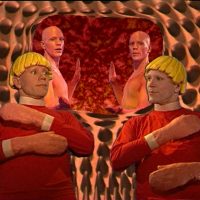 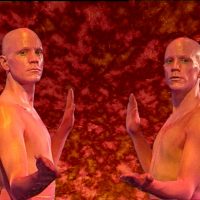 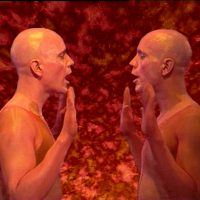 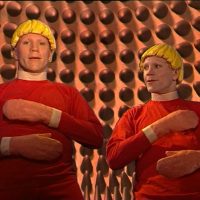 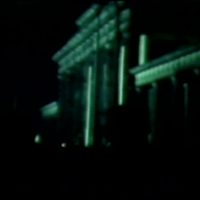